Baked Camembert or Brie with Endive as Scoop 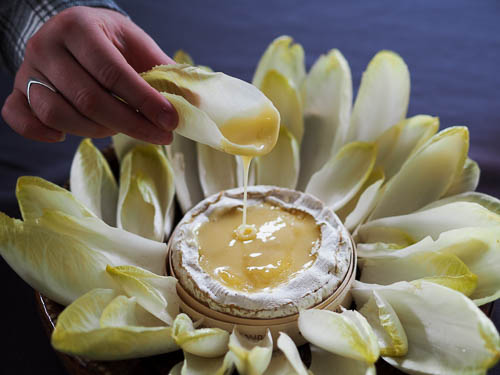 Use endive leaves as spoonto dig into melted cheese is the most easy decadent way to eat baked Camembert or Brie.

A whole wheel of melting Camembert in which you dig endive / chicory as a spoon. How decadent. Simple and delicious.

It’s kind of strange for a French to see a Camenbert called Brie as they are twi different cheeses and that at first glance, you can definitely say, according to the size that the decadent creamy baked brie are… no brie at all but Camenbert. They might look a bit similar but are actually different.

I don’t say that to be rude but just to explain you real French food.

First the difference Brie vs. Camembert

Brie and Camembert are both soft ripened cow’s milk French cheeses. However, they are different in regions and method of production and size.

Brie, older than Camembert, hails from the Eastern part of Paris Region Ile-de-France (this region having the same name: Brie). Camembert is made in Normandy, in the northwest of France, roughly between Paris and Brittany. The story says that Camembert was created in the City of Camembert following the advices of a priest originated from Brie who moved to Normandy to escape French Revolution.

Both Brie and Camembert are produced with cow’s milk but they don’t use the same rennet in fabrication process. The lactic starters, for instance, are stronger in Camembert than in Brie. As a result, Brie have a milder flavor. Sometimes, cream is added to Brie during the cheese-making process, makink it richer with a creamier texture.

Camembert measures 4.5 inches across and 1.5 height, weight 250 grams / 0,55 pound and is always sold whole, whereas a wheel of Brie is much wider, measuring between 9 and 17 inches in diameter and 1 to 1.5 height, depending on if it’s a Brie de Meaux or Brie de Meulun. Brie wheels can weight up to 3.5 kilos / 7,71 pound. Brie is almost always sold sliced.

I wonder why Camembert are sometimes called brie outside France, maybe because some small Bries similar in size to Camembert can now be found, or maybe for marketing reasons. I have to find out.

I’m not giving you a recipe that makes the most beautiful effect for food styling and culinary photography, with exuberant nuts, raisins or cranberries, melting honey… Even garlic or olive oil sometimes. This for two reasons:

So now on to the most simple two ingredients baked brie or Camembert recipe.

Baked Camembert or Brie with Endive as Scoop