Here is how to make the classic French broiled Soupe à l’oignon. Comforting caramelized onions cooked in broth, decadent broiled cheese on baguette. The best ever.

Soupe à l’oignon is an iconic dish of traditional French cuisine, and actually a soup the French like to cook often. So comforting on a chilly day. Better homemade and yet so simple to prepare.

All you need is time to roast onions then when caramelized let them cook in broth to enhance flavors. Long time but hands-off.

A bit rich and decadent, I admit, but sooo comforting. When the onion soup is ready, choose oven proof bowls, those on the pics are classic of French restaurants, add thick slices of toasted bread, may it be baguette or country bread. Then sprinkle a thick layer of shredded cheese (Comté cheese is a must but often replaced by Gruyère or Emmental).

Finally in the oven to broil until cheese is melted. You then eat it right away, in hot bowls. A delight. I told you it was easy…

In French this soup is called soupe à l’oignon (soupe = soup, oignon = onion), and sometimes say gratinée à l’oignon, the verb gratiner meaning to broil as what makes this soup so unique is that cheese is not only melted, it’s broiled under the grill of the oven. 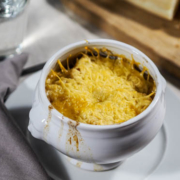 If needed, please refer to the conversion and measures article here
You liked this recipe?Subscribe to my mailing list for more French recipes and exclusive content