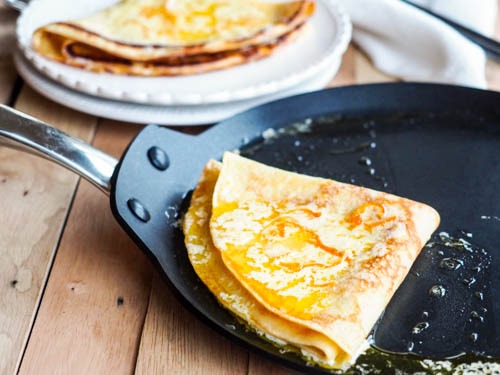 The iconic crêpes Suzette are often served flambéed. The original recipe, as invented by Escoffier, is actually with orange-flavored butter.

The recipe I’m sharing with you here is the authentic traditional recipe, done according to the principles of the one invented by Chef Auguste Escoffier for Prince of Wales, future King Edward VII, and the charming lady Suzette. Therefore, the sauce with Grand Marnier or other orange or tangerine alcohol is not flambéed. You’ll find the alcohol in the batter and a few drops are poured on the crêpes.

Even the French mostly think the authentic recipe of crêpes Suzette is flambéed. This adaptation is widely spread nowadays, not the original and proper one. Therefore, in France, we prepare both this proper one and the flambéed one. This is the reason why I share both recipes on the blog; you can find the flambéed recipe here. A must-try, it’s absolutely decadent!

Information on the traditional recipe

It’s not always easy to find the real initial recipe when it comes to traditional dishes. For crêpes Suzette, The Larousse Gastronomique in its 1938 edition, explains the proportions of butter, sugar, and alcohol, and especially how to do it. Once the crêpes are filled, they must be folded in four and served hot.

First the batter. I give many tips and tricks to master French crêpes in this article along with the classic batter recipe. Use any crêpe batter you are used to, your’s or mine below. Don’t forget to add a bit of Cointreau, Grand Marnier, or Curaçao (or any orange alcohol you like) in the batter. Initially, Escoffier used Curacao.

Crêpes are topped with candied orange zest and an orange or tangerine butter (but the tangerines tend to be more and more difficult to find in France). Room temperature butter is combined with orange zest and a bit of orange juice, then set in the refrigerator. I give many tips and tricks to master French crêpes in this article along with my ultimate crêpe batter recipe.

The method for each crepe is to pour the batter in a hot greased with butter non-stick pan. Cook for 1 or 2 minutes on one side, then flip. Cook another minute on the second side. Then spread orange butter and candied zests on half of the crêpe. Fold in in two the fold again in two. On this quarter, spread orange butter and orange zest again. Either store in a warm oven before serving or wait until butter has melted and serve.

To serve crêpes Suzette warm with this absolutely delicious melting orange butter, the best thing to do is to prepare crepes one after the other and store them in a warm oven so that they will stay warm, butter melting and without drying.
Drizzle with a bit of alcohol when serving.

Learn the story of crêpes Suzette

If you’re interested in learning the story behind this dish, where the recipe comes from, why it was invented by Escoffier in honor of Suzette, who was this Lady Suzette dining with Prince of Wales…. Then head to this article where I explain the story and origin of crêpes Suzette. Funnily it’s on the flambéed recipe, which is the first I shared here on the blog.

If you are a French crêpe lover then you are in the right place. I very often offer crêpes to my daughters; it’s among their breakfast and goûter afternoon snack’s favorites. I already talked to you about the basic crêpe recipe with tips and tricks, the flambéed crêpe Suzette recipe. My personal favorite crêpe topping is with salted butter, lemon juice, and brown sugar. This one with pears and caramelized sauce is not bad too!
And if you’re looking for a crêpe batter that changes from the classic one, I suggest replacing milk with hazelnut milk. Or using chestnut flour. You’ll find all those recipes on the blog. 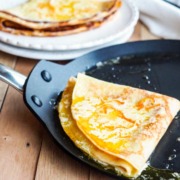 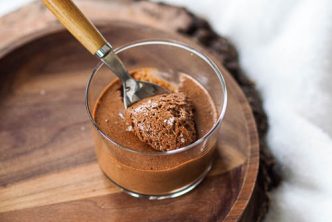 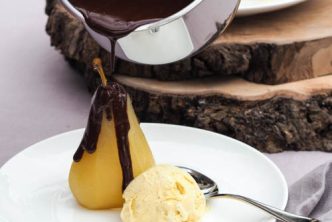 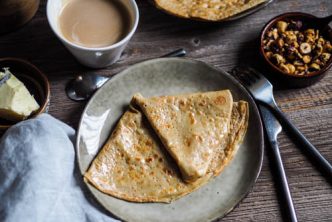 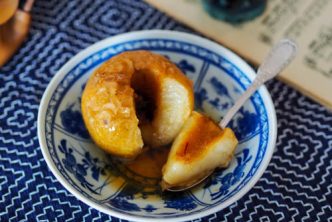