Or should I say lava cake? Absolutely decadent with warm rich runny center and so chic. For chocolate lovers who want to eat like the French.

The recipe is not my own creation but French Chef Christophe Felder. For classic and simple recipes like this one, I could pretend inventing one with 10 gr more, 20 gr less here and there. But when fool proof recipes are just perfect, well why not using them? However, I give you explanations, tips and tricks, and the story behind this iconic French dessert, as you know I love French gastronomy.

Be that as it may, chocolate fondant (or should I say molten cake? lava cake?) is really something the French bake very often at home and that became a great classic of French restaurants, form small bistrots to more fancy restaurants. It’s super quick and easy, only 5 ingredients.

Well it all depends on your oven, the size of your molds and how much you fill them, and how much more or less cooked and runny you like it. The secret of having a molten inside is to rest the preparation for at least 1 hour in the refrigerator before baking it at high temperature. The high temperature will quickly bake the outside of the cake while the inside won’t have time to bake, it will just be reheated thus melting.

In my oven it takes about 10 min at 200°C/390°F until it is well risen, all around is well cooked but in the center it is still molten under a thin cooked crust. When you shake it, it moves a bit. Try a first batch, take one off and taste until you find out the right baking time for your oven and taste.

How to serve chocolate fondants

What to serve with chocolate fondant ?

Another way to make this dessert even more fancy, is to place in the center of each individual cake before placing them in the oven  a frozen ball of caramel, lemon curd, mixed fuit… You’ll get a melting surprise! I have a recipe in French  here.

Whatever you wall those individual desserts (molten cake, lava cake or chocolate fondant, even in French we have different ways to name it fondant, coulant, Coeur coulant or mi-cuit), this dishes was invented by the French Chef Michel Bras in 1981.
Chef Michel Bras invented this delight starting with a feeling. While returning home cross country skiing, he served on the kitchen table hot chocolate to his frozen family, chilled to the bone. The lovely memories of this moment and the taste of decadent warm chocolate inspired him create a recipe of warm molten chocolate cake.
The Chef’s original recipe with a combination of hot and cold, was composed of two parts: a biscuit dough and in the middle a frozen chocolate ganache. Once removed from the oven, “the biscuit is cooked and warm whilst in the middle, the chocolate, as liquid as ours was that day after skiing, flows like molten lava as soon as the spoon breaks through the biscuit exterior. Visually stunning, emotionally heart-warming.” as says Michel Bras on his website. 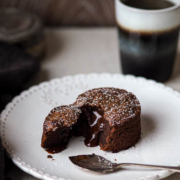 Rest 1 hour in the fridge

In ramekin you eat with a spoon. If you want to serve on a dish, chocolate fondant are difficult to unmold. You may either cover the ramequin with parchment paper before pouring the batter or use pastry circles as explained before in the article.
You liked this recipe?Subscribe to my mailing list for more French recipes and exclusive content 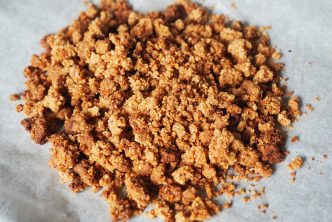