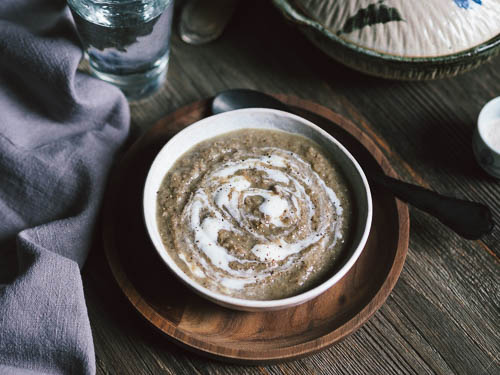 Champignons de Paris (lit. Paris mushrooms as we call it in France) makes a healthy, smooth soup ideal for a light dinner.

This is a soup I cook very often, actually not only on winter cold days but as soon as we get mushrooms in early September. And then each time I find nice firm button mushrooms at the farmers market.

In French, button mushrooms are called champignons de Paris, literally Paris mushrooms. They are either white or brown. The brown ones tend to be more firm with a denser texture.
Initially cultivated in Paris undergrounds, there are few producers nowadays in the Paris area, and we have to be careful when buying mushrooms in France as many come from Poland. The French champignons de Paris now mainly come from the Loire valley.
I recently read that they appeared in Versailles in the times of King Louis XIV and that they widely developed during the Napoleonic era (beginning of 19th century) in Parisian catacombs and quarries. They were much appreciated then.

Button mushroom soup is very soft and creamy. No need to add potatoes or any other thickener. The directions are very simple; you’ll see this soup is quick to prepare.

Which topping for the soup

As a French, the first thing that comes to my mind is… cream. I like to mix the soup with a bit of cream or milk. Then pour more cream when serving. As on the photos, then just seasoned with salt and freshly ground pepper. You can of course make a dairy-free mushroom soup by removing the cream and choosing a good quality vegetable broth.

Croutons are great too. Cut slices or cubes of baguette or country-style bread and either pan fry them with butter or toast them or placed them in the oven under the grill.

Many others And also bacon or ham strips, walnut spreads, grated parmesan or goat cheese… Possibilities are endless.

When I first posted this recipe on the blog that I’m updating right now, I topped it with smoked duck fillet ships and roasted pine nuts (this photo was one of my first attempts at food photography!)
Ingredients :
20 slices smoked duck filets,
30 gr pine nuts = 2 tablespoons,
1 tablespoon olive oil
Instructions :
While the mushrooms are cooking, preheat the oven to 250°C (480°F). Remove the fat from the slices of smoked duck filets. Place them on the frying pan of your oven covered with greaseproof paper. Bake in the oven at 250°C (480°F) for 4 to 5 minutes. They will become crispy without burning. Note that if you don’t want the slices to curl, place them between two pans. I don’t mind if it curves as it will help to give a structure while arranging the dish.
Place a frying pan with 1 tablespoon of olive oil on the high heat of your stove. When the pan is hot, add the pine seeds and keep stirring to avoid burning. After a few minutes, remove them.
Place both slices of duck and pine seeds on a plate covered with paper towels so that it will absorb the remaining oil. 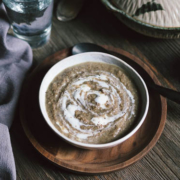 Prepare and cook the soup

If needed, refer to the Conversion and Measures article here Tip: At the beginning, mix all the vegetables with only a part of the cooking liquid and add progressively part or all the remaining liquid so that you will obtain the consistency you wish to. If you mix all together at first, you might have a very liquid soup as mushrooms tend to produce a lot of liquid while cooking.
You liked this recipe?Subscribe to my mailing list for more French recipes and exclusive content