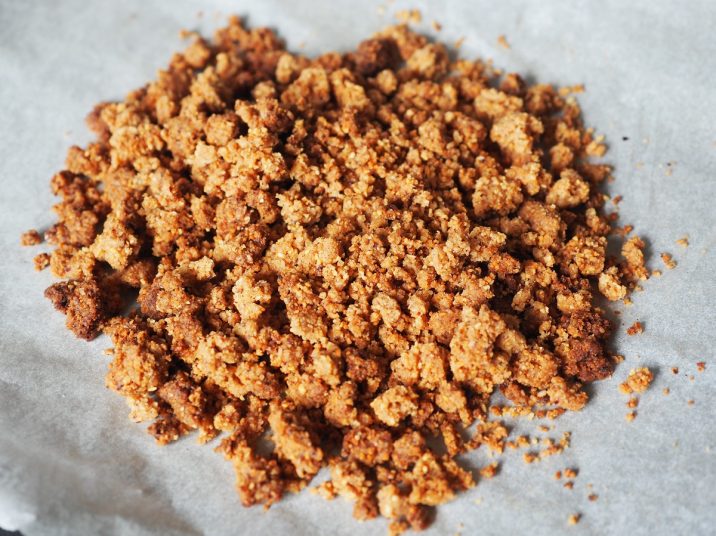 Streusel is a traditional crumble topping from East France Alsace. Cinnamon and hazelnut or almond powder are added to the classic butter – sugar – flour mix.

How to use this streusel preparation?

You can use this streusel crisp in different ways for desserts:

Which ingredients are best to use for streusel?

This recipe is made with hazelnut powder, but you can, according to your taste, replace it with almond powder (or eventually use 100% flour by doubling flour quantities).

As for spices, cinnamon will give the typical streusel taste to your crisp preparation. You may want to adjust the amount of cinnamon, reducing it to half a teaspoon or even having two teaspoons if you’re a big fan of this spice, according to your taste and how you will use it for so that the flavors go well together.

Raw sugar gives a wonderful taste to the preparation. You may replace it with caster sugar.

Finally, adding small chunks of dried fruit or nuts (pistachio, hazelnut, crushed almonds) can be very interesting. Why don’t you give it a try, with, for example, a handful of mixed toasted hazelnuts and candied orange peels? I’ve added it as optional in the recipe.

From this basic recipe, feel free to adapt. Variations are endless.

The story behind Alsacian streusel

As the crumble came to France from the Anglo-Saxon world, streusel originates from Germany. According to historians, streusel was probably adopted by Alsace Lorraine at the time of the Reischland (cession of the imperial territory of Alsace Lorraine to the German Empire in 1871. Those lands were returned to France with the Treaty of Versailles in 1919).

The term streusel comes from the German word “streusen” which means to spread, to scatter, to sprinkle (a bit like the English meaning of crumble in English!).

By extension, a cake was also given the name of streusel. When it designates a cake, not the crisp topping, Streusel is a round and soft Alsatian brioche covered with this streusel crisp, giving it an incomparable crispness.

A special note here. I think learning the origins and history of dishes is both very interesting and sometimes helps to understand the recipe better. So if, as I am, you are interested in learning more about the French gastronomic heritage, the story behind recipes, and culinary traditions, then you are in the right place. I often share the story behind the dish for the traditional French recipes (in the text before the recipe), and information on French food-related traditions (in this section of the blog).

Feel free to use your favorite crumble recipe and switch your usual crisp topping by this recipe. You can also use this apple crisp recipe and change the speculoos crumble topping to this streusel recipe instead. I’ll share another recipe with apple, pear, and raisins soon.

If you are a crumble lover, you may want to check as well two of my recipes that are available on this blog:

I imagined this recipe for a cooking show done for French TV during the SIAL international food fair. The streusel was pre-cooked and sprinkled on pineapple and caramel verrines. 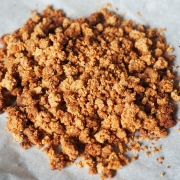 The indicated cooking time varies according to the use. The recipe may also be made with softened butter at room temperature, then mix the preparation without overheating it with your fingers.
You liked this recipe?Subscribe to my mailing list for more French recipes and exclusive content 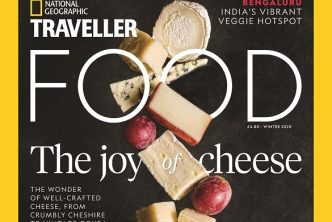